A flavoursome and hearty Cuban dish that originated in Spain. This dish is traditionally made with shredded beef and vegetables resembling colourful shredded old clothes, which is where the dish gets its name. Ropa Vieja is Spanish for ‘old clothes’. Our recipe uses king oyster mushrooms which work perfectly to resemble the texture of the dish without losing any of the umami flavours. King oyster mushrooms shred up perfectly with a fork before cooking.

The king oyster mushrooms are the star of the dish and perfectly mimic the texture of Ropa Vieja. Depending on where in the world you are they could be called king trumpet or eryngii mushrooms. Up until quite recently, these have been quite hard to find. Only really being available to me in my local Asian market. However, they are now widely available in Tesco locally which is a major supermarket in the UK.

If you can’t find these mushrooms then you could still make Vegan Ropa Vieja with other mushrooms or a shredded vegan meat alternative. If using other mushrooms I would suggest using portobello mushrooms. Cooking them and pressing them as I do in the Vegan Bulgogi recipe. Slicing them into 1cm strips rather than the 2cm strips stated in that recipe. This would get you closest to the texture of the king oyster mushrooms.

Ropa Vieja is typically served with rice and Frijoles Negros and that’s how we ate it. Its also usually served with sweet fried plantains. However, plantains have been impossible to find where I live for the past couple of years.

After making Ropa Vieja a few times I noticed that the flavours got better when eating leftovers the following day. Consider making a double batch of it and having it in the fridge for later in the week. 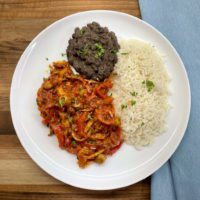 If you cant find Spanish white onions then normal white or brown onions would work. If you don’t want to add the wine replace it with more vegetable bullion.
Tried this recipe?Mention @mikeronm or tag #theveganplanetkitchen!
Tags: Mushrooms, Tomatoes