Vegan Coxinha, Brazilian croquettes made with a mushroom and cream cheese filling in a soft dough casing. Coated in breadcrumbs and deep-fried into the perfect crispy snack.

Coxinhas are a popular Brazillian snack that’s usually made with shredded chicken and cream cheese stuffed in dough then battered and fried into crispy perfection. This vegan version is even tastier.

These Vegan Coxinhas are great as a snack, dipped in your favourite hot sauce. They can be made ahead of time and reheat well in the oven.

Separate the dough into 12 equal balls. Flatten each ball into a disk roughly 5mm thick. Place roughly a tablespoon of the chilled filling in the centre.

Bring all sides together and pinch in the middle.

Create a teardrop shape and make sure there are no holes in the dough. This can cause the filling to explode out of the dough when deep frying. 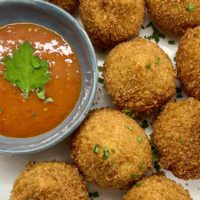 Leftovers can be kept in the fridge for up to 3 days and reheated in an oven.
Tried this recipe?Mention @mikeronm or tag #theveganplanetkitchen!
Tags: Mushrooms