Vegan Pira Caldo, a vegan take on a traditional Paraguayan fish soup. Made with hearts of palm and vegetables in an aromatic coconut milk broth. Finished off with vegan cheese and fresh coriander.

Traditionally Pira Caldo is made with river fish, milk and soft white cheese. To veganize it we used hearts of palm. Its delicate texture and taste work great as a replacement for fish. The flavour of coconut milk works well with the other ingredients. The cheese is harder to replicate as plant-based cheese tends to dissolve into the soup too quickly. We found adding some vegan feta when serving gets the best results.

Serve Pira Caldo hot as a tasty lunch or lighter dinner. Perfect served with a warm fresh slice of Sopa Paraguaya. We have an easy to follow recipe for Vegan Sopa Paraguaya. 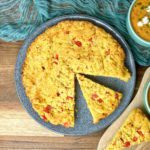 Vegan Sopa Paraguaya – Paraguayan Cornbread
A vegan take on the National dish of Paraguay. A colourful and tasty cheese and onion Cornbread. Delicious served with a soup or stew or on its own as a treat.
Check out this recipe