Vegan Sopa Paraguaya, a vegan take on the National dish of Paraguay. Moist cheese and onion Cornbread. Delicious served with a soup or stew or on its own as a treat.

Sopa Paraguaya is the National dish of Paraguay. A cheese and onion cornbread. The name, as the legend goes, was from when a cook of the first president of Paraguay accidentally added too much cornmeal to the president’s favourite soup. Too late to rectify the mistake she served it anyway. The president was impressed with the new dish and declared it Sopa Paraguaya.

Sopa Paraguaya is a delicious bread that goes well with anything. We had it with our Vegan Pira Caldo and with our Vegan Puchero Paraguayo. Leftovers didn’t last long as it’s great as a treat on its own. Paraguayan cornbread would also be great to serve with a BBQ in the summer. 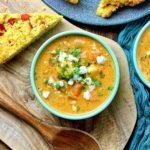 Vegan Pira Caldo – Paraguayan Soup
Vegan Pira Caldo, a vegan take on a traditional Paraguayan fish soup. Made with hearts of palm and vegetables in an aromatic coconut milk broth. Finished off with vegan cheese and fresh coriander.
Check out this recipe

Cornmeal can be a confusing ingredient to buy in some parts of the world. For us, fine polenta is what we have to buy. You want to get cornmeal that’s medium to fine grit. Something like grits would be too big. Also, make sure it’s yellow in colour for the best results.

Vegan Mozzarella, Sopa Paraguaya is traditionally made with a Queso Paraguayo, a type of rich white cheese. For a vegan version, we found using vegan mozzarella or feta worked the best. 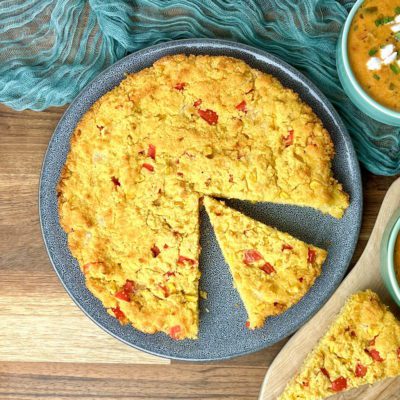 A vegan take on the National dish of Paraguay. A colourful and tasty cheese and onion Cornbread. Delicious served with a soup or stew or on its own as a treat.
No ratings yet
Prep Time 5 mins
Cook Time 35 mins
Course Side Dish, Snack
Cuisine Paraguayan